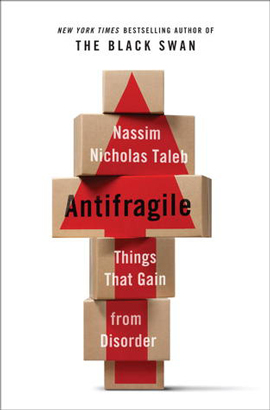 Comfort Is a Disease of Modernity.

Small failures must be allowed and encouraged in order for systems to improve.

Half of all history (scientific, medical, political, etc.) is unaccounted for because the endeavours did not produce any results, and were therefore seen as failures. But did they actually fail? We would not know what to ‘do’ if we did not know what to ‘not do’. Therefore, these ‘failures’ were, in fact, essential to progress. But such endeavours are rarely recorded in scientific journals or the history books; it’s hard to take credit for failing to find a cure to a disease, or deciding not to enter a costly war. This is one of society’s blind spots.

There is a tendency in our society to sweep failures under the rug, and wait until they accumulate to the point that entire systems explode. A good example of this included the banking institutions and the crash of 2008.

We cannot measure risk, but we can measure antifragility.

In a world of increasing Black Swan effects (both positive and negative), it is becoming more and more irrelevant and imprecise to try to predict the future. It is, however, possible to measure the fragility and changing our behaviour so that we may benefit from this unpredictability.

Human beings, as well as all other animals, are antifragile. As we expose ourselves to small, non-lethal amounts of stressors (ie. dirt, poisons, pain, hunger, etc.), our bodies overcompensate in order to protect ourselves from the next exposure. Our bodies instinctively know that it may very likely be worse next time. In bodybuilding, this is known as super compensation or hypertrophy, and is the reason muscles get bigger than before being strained from lifting.

Inanimate object are fragile. They are simple systems (as opposed to the complex systems of animal biology), and do not respond well to volatility. At best, they are robust, more capable of withstanding damage from volatility.

Some systems, such as the air travel industry, are antifragile. With every airplane crash, lessons are learned, and the system as a whole becomes safer. The reason is that fragility isn’t concentrated at the top (as it was within the fragile Communist Soviet Union political system), but is pushed downwards. The airplanes themselves are in some ways fragile, but the system continues to improve from small failures.

Just as Simon Sinek talked about in Leaders Eat Last, companies and nation states are getting too big – so big that they cease to be effective. People no longer feel connected, and are not responsible to each other. In an antifragile society, people are allowed to have smaller fights and failures on a municipal level. They thereby avoid cataclysmic and systemic failures at the top. One of the most stable countries in the world is Switzerland, which operates on exactly this principle.

A simple way of thinking about antifragility is to compare the upside to the downside.

Concave optionality has a large, unknown downside, and a small, known upside. It looks like an upside down smiley face shape. Examples of concavity include medical interventionism for minor health problems (best case scenario: you fix the small ailment, worst case: who knows?), or potentially destroying the environment for more oil (best case: you get some more oil, worst case: who knows?).

Convex optionality has a large, unknown upside, and small known downside. This figure looks like a smiley face, and examples of this include city walks, parties and thrift shops. The only thing you have to lose in any of these activities is a small amount of time. But the potential conversation, connections, or other positive surprises can be enormous. There is a small risk, but no more so than any other activity.

In the olden days, systems were controlled by heuristics; simple rules of thumb, evolved over long periods of time. Academics like to believe that they were responsible for much of modern success, but the fact of the matter is that academia is very much on the tail-end of scientific discovery and other forces of good on this planet. They have the benefit of cherry-picking their ‘predictions’ after the fact. Thinkers think, doers do.

It is often a confusion of direction, cause and effect. Does more education lead to richer nations or do richer countries lead to more eduction? If the former is true, then rising suicide rates should also be an indicator of a nation increasing in wealth. Cause and correlation are too often confused.

Application of this book in my own life.

There is a major gap between thinking and doing. The former is much easier than the latter, and a major contributing factor to the fragilizing of our modern society is ‘people without skin in the game’ (ie. thinkers) telling innocent people how to live their lives.

I realized that I could not continue to write these book synopses without having skin in the game. I must practice what I preach, and furthermore, I must have something to lose if what I write turns out to be incorrect.

As I listened to this audiobook, I was walking around towns and cities using headphones. I realized that I was creating concave optionality for myself (best case scenario: I finish listening to the book and get some new information. Worst case scenario: I miss out on an amazing opportunity to talk to a stranger, or who knows?). The downside far exceeded the upside, and I decided to stop letting books (which aren’t going anywhere) get in the way of me experiencing the nuances and unpredictabilities of real, present life.

Other people, ie. connections, are arguably the biggest potential upside. You never know what someone else can teach you. The best information is rarely the information you seek, but comes as a surprise (not always pleasantly) and changes your perception of the world.

We need to stay alert and open to new information. In this way, surprises can only serve to improve our lives.