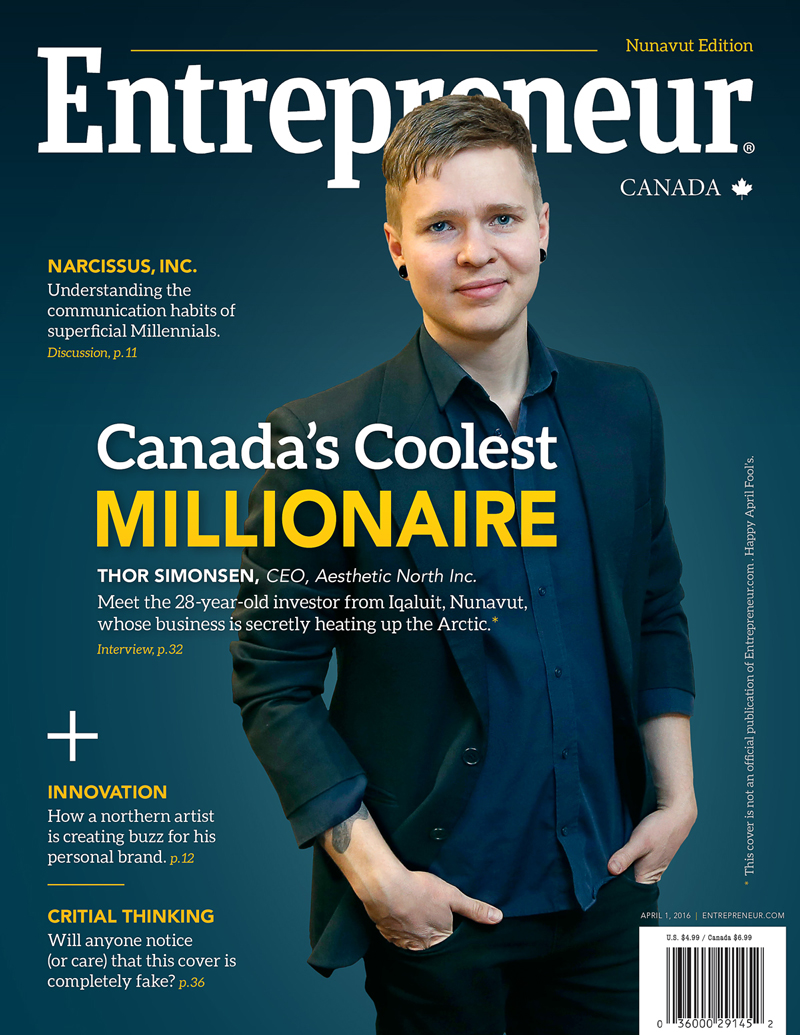 Every year on the first day of April, people around the world decide to think critically; they do their homework in order to guard themselves from lies, half-truths, and any narratives that attempt to deceive them. April Fool’s appears to be a harmless running gag, and everyone seems to be in on the joke.

Unfortunately, many parties – advertisers, marketers (like me), politicians, lobbyists, Donald Trump, and the entire Corporate World – have intense financial interest in fooling you all year-round. A single day of mental vigilance is futile – a drop in the proverbial bucket.

To make this point (and because it was funny), I created a false Entrepreneur Magazine cover. To be completely clear: I am not (yet) a millionaire. The project was an experiment in human psychology, social media, and marketing. I wanted to show showcase the importance of critical thinking and the dangerous consequences of its absence.

An old friend recently lamented me for ‘liking’ Donald Trump’s Facebook page. She shared this fact on my Timeline, likely in a subconscious attempt to shame me into un-liking his page.

As explained to her, I’d ‘liked’ Trump, not because I shared his political views, but rather, because I wanted to stay aware of his communications.“Know Your Enemy” they say – and Trump is a powerful enemy. There is no denying that his campaigning is effective, assuming his objective is to garner media attention and thereby (possibly) become the next President of the United States.

I was disappointed that my friend equated my “like” with my “endorsement” – given our long friendship, she, of all people, should know how much I support anti-Trump ideals like multiculturalism, inclusion, respect, open-mindedness, higher knowledge, and love in all forms.

I reminded her that people, even those with different political views, should remember to think critically, avoid making broad assumptions, and resist jumping to conclusions. Failure to avoid such reactive behaviours would be no more righteous than the “ignorant” behaviour of the Trump supporters she hoped to denounce.

Ignorance, unfortunately, is not limited to Republicans.

Inspired by her actions, I decided to experiment with some of Trump’s own marketing tricks on my unsuspecting social media  followers (to whom, by the way, I’m very sorry if I caused offence with this hoax).

These tricks included manipulations of

I wanted to know if people would questions the validity of a magazine cover – an “obvious” lie to anyone who claims to know me or my business. I hypothesize that 60-80% of people will assume it to be true, simply by virtue of it being “in print”.

I hope to be proven wrong.

[Part 2 will be written once feedback from the experiment is obtained.]