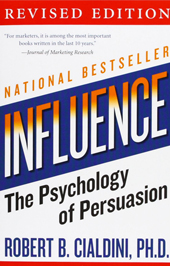 Many of the decisions we make are not our own. Due to the profit motive, Compliance Professionals (CPs) have been studying the art of influence for hundreds of years.

The ability to make someone comply to a request is a very potent form of power, and, depending on how it is used, it can be either very beneficial or extremely dangerous.

The reason the methods are effective is that they utilize naturally-occurring forces of nature. The author describes these ‘Weapons of Influence’ in detail, explaining how they work, examples from everyday life, and ways we can protect ourselves against them.

Here are the 6 most important concepts to understand:

In order for people to function in an ever-increasingly complex world, our brains are forced to take mental shortcuts; we simplify in order to navigate the massive sea of information. We rely on ‘rules of thumb’ we know to be true most of the time. Unfortunately, CPs know how to exploit this ‘laziness’ for maximum profit.

If people had to fully understand all aspects of the products they purchased, they wouldn’t have time to do anything else. Instead, people tend to fall back on the idea that the price of something is representative of its quality. Although this is often true, it can also be used to make something “appear” higher quality than it actually is.

“If other people are doing it, then it must be correct.” In general, this kind of mental shortcut can be very time-saving. However, it can also be very dangerous; blind, mindless adherence to such a rule helps explain canned laughter, mob mentality, and mass suicides.

Taking the advice of professionals, experts, doctors, and other people of authority, although often correct, can also be dangerous. Authority can easily be faked and utilized in order to make you respond in a certain way. Things like titles, clothes, and other symbols of authority can be used to dupe people into compliance.

Whenever presented with two different offers, one before the other, differences between them will be exaggerated due to the principle of perceptual contrast. Salesmen, therefore, often show a potential customer a grossly overpriced product first, only to show them a “moderately-priced” second item, which will suddenly seem very affordable.

Reciprocity is the willingness of people to return the behaviour which they are shown. For example, if someone gives you a gift, you will feel compelled to return the favour. This function is built into the human psyche as a way to promote collaboration. It is a major reason why humans have evolved to become the dominant species.

CPs often use reciprocity to take advantage of potential customers. Examples could include a free gift, sample, cup of coffee, trial membership, or even just a flower. The preemptive gift-giving will (consciously or subconsciously) cause you to want to return the favour.

A simple way to defend yourself against having reciprocity used on you is to become aware whenever a person is giving you something for free and has any sort of financial interested vested in you, immediately or in the future.

People like to live up the image they have of themselves. For example, if you say to someone, “My friends told me that you were kind”, the person you’re speaking to is more likely to behave in a kind manner.  (This example also employs the reciprocity by giving them a gift of a compliment.)

Many industries use this principle to sell more product. For example, the toy industry will advertise a particular toy heavily (Nintendo64s, Ferbies, etc.), encouraging parents to make promises to their kids to get it for them the toy. They then undersupply the stores with that toy, forcing the parents to buy alternate gifts. After Christmas, the industry begins re-advertising the toy. In an effort to stay consistent with the self-image of someone who follows through on their promise, the parents buy the toy. The principle of consistency effectively forces parents to spend twice as much money on toys.

We’re much more likely to buy from someone we like, and there are many ways to increase likability.

Studies show that, on average, we consistently underestimate the bias we have towards attractive people. These people are considered to be smarted, kinder, more trustworthy, and so forth. CPs take advantage of this fact by using beautiful people to advertise their product, be their spokes person, etc.

We are more likely to take the word of someone who is similar to us. This is why advertisements show people “just like us” who are endorsing the product. Even if this person is obviously an actor paid to promote the product, the fact that they seem similar to us and seem to enjoy the product propels us to buy the product.

The more often we are exposed to something, in a positive way, the more likely we are to like it. This explains why we chose known brands over generic products. For example, we buy Tylenol instead of the generic-brand equivalent, Acetaminophen, even though it is more expensive.

Things associated with powerful ideas, people, places, etc. are more likely to make us buy something. For example, a product endorsed by a celebrity often sell very well because of its positive association to him or her. Likewise, this explains why people often hate weathermen in cold regions, as they associate them with bad or destructive weather (which explains the timeless maxim, “don’t kill the messenger”).

Originally an evolutionary advantage, sensitivity to loss aversion is now commonly exploited by CPs. A common method of compliance is by fabricating scarcity. This can be done by implementing a limit on time (“available for a limited time only”), quantities (“while supplies last”), editions (“deluxe version”), and so on. Ironically, the banning of books, ideas, or art, often makes it more attractive to potential customers.

These are only a few of the methods described in this book. In combining these principles in different ways, CPs have a powerful formula for making people comply to their requests.

Their power lies in the people’s ignorance to them, and the best way to defend against them is to raise our awareness.

In his description of the principles, the author stresses the need to remain optimistic and have faith in people. The principles are naturally-occurring methods of influence, and, although it might not seem like it, not everybody is out to trick you and take your money all the time.

But many are – so be aware.