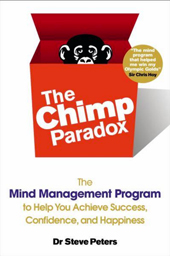 In The Chimp Paradox, Dr. Steve Peters provides an analogy to explain how our brains work. He explains cutting-edge neuroscience using simple metaphors and creates a model by which we can learn to manage our animalistic thoughts, emotions and behaviours.

The 3 Parts of Your Brain

According to the author, the psychological brain is composed of 3 main parts: the ‘Chimp’ brain (limbic brain), the ‘Human’ brain (frontal lobe), and the ‘Computer’ (parietal lobe).

1. The Chimp is the oldest part of our brain, and it has evolved over time to help us survive in hostile environments. Naturally, the Chimp is hardwired to be insecure, fearful, xenophobic, paranoid and stubborn. It thinks in black and white and fatalistically. Because of this, it interprets the world emotionally and intuitively, often filling in gaps of knowledge in order to justify its assumptions. This is the part of the brain that – driven by instincts and primal needs – desperately wants that second slice of cake.

2. The Human is a newer, more sophisticated part of the brain, and makes its decisions based on objective truth. It interprets the world through logic, reason, and facts. In contrast to the Chimp, the Human is capable of thinking in shades of grey, and takes time to think of proactive, effective solutions to problems. The Human is the part of your brain that is ‘the real you’ – the part that thinks a second slice of cake is a bad idea, seeing as you’re trying to eat healthier.

3. The Computer is the processing unit and reference bank (memories and ideas) to which the Chimp and Human look for guidance. It has both hardware and software operating systems, the latter of which can be reprogrammed by the Human to function optimally. However, this can only be done once the Human has become aware of which thoughts, emotions and behaviour belong to itself and which belong to the Chimp.

Both the Chimp and Human brains are useful, and they have the ability to work collaboratively if they agree. However, since the two often have very different motives, disagreements are bound to arise. The Chimp is five times stronger than the Human, and it will inevitably win any fights between them. This explains why the Chimp lets you take that second slice of cake – despite the Human’s rational objections.

The Chimp also receives all new information first, and strongly ‘suggests’ to the Human how it ought to react to any given situation. The Human has the ability to question this suggestion, but since it is not aware that it is being hijacked by the Chimp, it rarely does. Instead, the Human will use logic and reason to justify the behaviour. This is why you take the second slice of cake and tell yourself, “It’s ok! I need to enjoy life now. I can eat healthier tomorrow.”

Become Aware of Your Animal

There is a simple rule of thumb to determine which brain you are using. Ask yourself: “Do I want to … (have these thoughts/feel this emotion/behave this way)? If the answer is “no”, then your Chimp has hijacked your brain. Since the Chimp is stronger than the Human, it is futile for the Human to try and fight the Chimp. It needs to manage the Chimp!

The first steps to doing this is to recognize when your Chimp is taking control. Reflect on your thoughts, emotions and actions, and begin to take inventory of when the “Do I want to…?” questions ends with a “no”.

Accept and Appease Your Animal

Accept the Chimp. Don’t try to change it – work with it. It’s there for a reason, and can be extremely helpful, if managed properly. Learn to recognize the dominant drives specific to your chimp (power, territory, ego, dominance, sex, food, troop, security, etc.) and learn to appease them in healthy ways.

Having a second piece of cake, for example, is the Chimp wanting to secure food for its survival. If you pre-emptively feed the Chimp healthy foods (like vegetables), then the Chimp’s cravings will be less intense, and the Human will be able to negotiate a more rational outcome (e.g. just the one slice of cake).

Once you recognize that the Chimp is taking control, follow these 3 steps:

1. Exercise the Chimp. ‘Let it all out’ in a safe environment. Externalize all your Chimp’s thoughts, emotions and actions. Write them down, record them, discuss them with a trusted friend, etc. If you need to get the emotions our of your physical body, cry, punch, run, scream, or punch something (not someone).

2. Coax the Chimp. Once your chimp has exhausted itself, it becomes much easier to communicate with. It is now open to reason and logic, and can (hopefully) be coaxed into changing its mind.

3. Give the Chimp a Banana. If the Chimp agrees to adopt the Human’s argument, reward the good behaviour. If it still won’t listen, distract it away from bad behaviour with treats.

The book goes into much greater detail and has an array of methods for managing your thoughts, emotions and  actions. It provides a great roadmap for how to deal with your psychological life in a proactive and effective manner.

We all need to recognize and accept the animal within ourselves and each other. Once we become aware of how our brains work, we can create conditions for us to live a natural, happy and peaceful life.