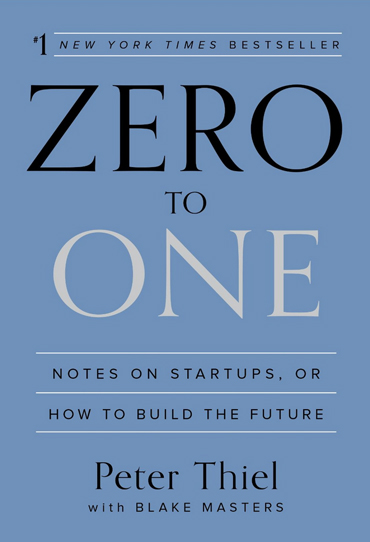 Zero to One by Peter Thiel and Blake Masters

“What’s one thing you believe about the world that most people disagree with you on?”

In order to answer this question you need courage, curiosity and, above all, independent thinking. All three are necessary to find the ‘secrets’ in both the natural and human universe. The author uses this question to determine if someone has the mindset necessary to seek and find these truths in order to help build a great company.

In business, a contrarian view of the world is important for prosperity and ‘vertical’ growth. Horizontal growth (globalization) is simply doing more of the same – moving from 1 to N. Vertical growth (technology) is creating a categorically different way to do things – moving from 0 to 1.

The latter is what drives economies and changes the way the world functions. It is crafted from ‘secrets’ hidden in plain sight. At first, very few people recognize the truth. The ideas seem ludicrous to the masses, but they soon become convention.

Despite what society has been saying for centuries, competition, like horizontal growth, is actually an unhealthy and destructive force for capitalism. Businesses are forced to fight instead of working together to solve problems. What market share one company gains here, the other loses there.

If competition is the greatest equalizing force in the economy, then monopolies are actually the drivers of commerce and innovation. Despite their dominance (which they downplay), monopolies are the only players capable of making transformative changes for the greater good.

Zero to One offers an interesting perspective on the current world of start-ups, world economies, technology (in all forms) and the nature of business itself.