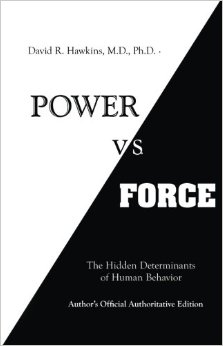 What would you do with true answers to every yes or no question imaginable?

As humans, we currently only use 10% of our brain capacity. What it there was a way for us to tap into the other 90% of it? According to David R. Hawkins, there is! In fact, Dr. Hawkins has developed a way to tap into the entire catalogue of all human thought through all time.

Using applied kinesiology, Dr. Hawkins and his team had subjects stretch out their arm while they applied downward pressure on it, all the while asking a very clear yes or no question. If the answer was true, the subject’s arm would remain strong – if false, the arm would become noticeably weaker.

The experiments were able to detect truths that the subject was completely unaware of, even truths that he or she disagreed with it. They were able to accurately detect synthetically-produced items versus organic ones, and many other forms of truth. The experiments were replicated many times and were proven clinically consistent across cultures and demographics. They were performed on groups of people using double-blind control groups. All results were the same: the method of questioning worked.

Sound, light and lasers are made up of invisible waves. Thoughts are also made out of waves, albeit resonating at a much higher frequency. This means that, just as with radio and tv waves, if given the right receiver, anybody is able to tap into the entirety of all human thought ever created – it’s all available at any given moment in the ether.

Hawkins and his team began to register the calibration of frequencies of truths from their experiments. They created a rating system called the Levels of Consciousness Chart (see below) that ranged from 0 to 1000. They created the system by asking the simple question: “From 0 to 1000, does this calibrate at X level?” 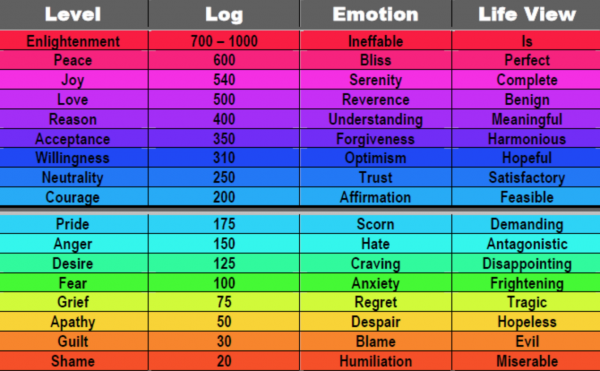 As it turns out, 200 is the catalyst calibration, at which positive (as opposed to negative) energy begins to be created. Currently, an overwhelming majority of the world lives below the 200 mark. Thankfully, a single person with a calibration of 500+ (including Albert Einstein, Winston Churchill, and most other great historical figures), more than makes up for the millions people whose energies are below 200. The power of the positive frequencies are exponentially more charged than the negative ones. This is why good will always prevail.

Based on this rating system, the researchers meticulously went through various types of written and visual materials, testing their frequencies. The written words of Jesus Christ was the only text which calibrated at 1000. This book itself (Power Vs. Force) was calibrated and edited to optimize its calibration.

The world has often been ruled by sheer Force; the British rule of India, the American Slave Trade, etc. But just as an abusive or controlling parent, boss or dictator is only exerting his or her ‘borrowed’ authority, Force will inevitably result in overthrow by Power.

Force has no chance against true Power. Greatness in the world comes from people who can harness Power, see past themselves, and do truly Good things for the world.