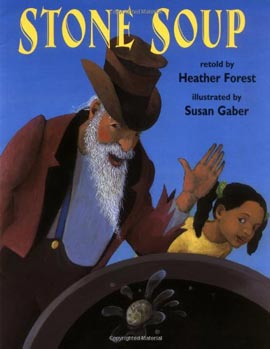 This book was described as the essence of any MBA training by the incredibly successful entrepreneur Peter Diamantis.

In the book, two poor and hungry men enter a village. They knock on everyone’s door, asking the villagers if they have any food to spare, but they are continuously told “no” and turned away.

Defeated, the two men sit on a hill. They decide that instead of moping around, they settle on a plan.

They call out to the villagers that they are great chefs and want to make them a pot of their delicious Stone Soup if someone will lend them a pot.

One hungry villager agrees and brings them a pot, and a large crowd gathers around.

The men throw a stone in the soup as they continue to enthral the villagers with tales of how delicious it will be.

One of the two men asks the villagers if someone has a carrot they can spare.

He asks the villagers if anyone else has a small potato they can spare.

One after one, the villagers all offer to lend a tiny bit of food for the soup, and in the end, everyone enjoys the most amazing soup they’ve ever tasted. Everyone is happy.

As the men are leaving the village, they remind the villagers not to forget the most important ingredient in the soup: sharing.

I highly appreciated the simple, subtle and elegant power of this story, and how the metaphor can be useful way of thinking about business and life.